I transcribed part of a video I saw today, to bring to light one of the most fascinating benefits offered by podcars for urban living.

When this Southeast Asian fishing village and trading post became independent in 1965, the founding Prime Minister Lee Kuan Yew committed to transforming Singapore from "mud flats to metropolis" in 10 years. It came to pass, not the least by "reclaim[ing] land in a useful way." With a density of 8,000 people per square kilometer on a small island, land management is indeed crucial.

Fast forward to the present day and let's find out what's in store for Singapore.

And so we'd like to build fewer roads going forward, and in fact have started to build almost no new roads and in fact all of the money is going into public infrastructure – more underground tunnels and so on.

But what we need to do is rethink the whole movement of people – not simply building more buses on the road – because that just keeps the congestion high.

Now this is a picture which we haven't shown publicly very often which is the Land Transport Authority in Singapore, the government agency with whom we partner, is thinking through a multilevel platform in Singapore that would allow several things to occur. 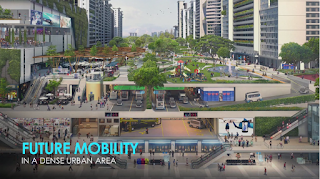 So if you can kind of read it from the bottom up, the underground system or mass rapid transit which is in place today and continues to expand. Then there is a level which would be primarily for goods delivery and freight and trying to keep that out of people's way. And so some of that would be autonomous, ideally more and more autonomous.

You go up a level and you have some of the last mile autonomous pods that would allow people to go from a central point to their final destination (love for more of that to be electric) and then on top what is currently a paved road surface would be reclaimed and thought of as parkland and areas in which there would be a quality of life because nobody wants to live in an increasingly dense environment in which you simply survive until you get home and so from this perspective we want to reclaim land.

So Singapore already has a high rate of trees, and planting and gardens but we want to make it more, and it's also a green aspect, which is of course the more we can do, the more we can contribute positively to the climate issue.

With a couple of simple steps, you can have this now in Singapore at perhaps 5% or 10% of the cost and 1% of the aggravation that your Land Transport Authority is contemplating:
What will you have now?
Join the solarevolution and celebrate "a quality of life!"

Posted by Ron Swenson at 9:38 PM No comments:

This slideshow explains the basic objectives of the Spartan Superway Academic Program.


This embedded slideshow feature may not work in Firefox. If you can't see the window here, you may need to change settings on your browser. It works directly with the Safari and Chrome browsers.

Posted by Ron Swenson at 5:12 AM No comments: